When we talk to funeral directors and other industry professionals about the importance of using their websites and digital marketing best practices to connect with customers online — for example, by posting obituaries to Facebook — one response we hear all too often is, “My customers don’t care about that kind of thing.”

Well… are you sure about that?

In fact, data collected by a number of different sources indicates that older adults are interested in and adopting social media usage at higher numbers than ever before. Check out the five surprising statistics below and see if these interesting data points don’t change your mind about the importance of actively engaging online!

87% of adults are online and using the internet

According to data collected by the Pew Research Center’s Internet Project, 87% of adults ages 18 and older use the internet — whether at home or at another location (for example, at a public library).

As you might expect, usage rates are highest among younger demographics, but even older users are becoming increasingly active online. An estimated 88% of survey respondents ages 50-64 use the internet, as well as 57% of adults ages 65 and older. These adults are looking for all types of information online — and if your funeral home doesn’t maintain an active website (22% of firms don’t) or social presence (only 41% of funeral services do), you’re missing out on a powerful opportunity to be the one who answers their funeral-related questions.

Of this 87 % of adults who are active online, the Pew Research Center’s Internet Project Social Media Update 2013, released on December 30th, 2013, estimates that nearly two-thirds maintain at least one active profile on a social networking site like Facebook, Twitter or Google+. Digging deeper into these stats reveals that 42% of online adults have multiple profiles across several different social media sites.

Certainly, not all of the adults that use social networking sites will be your target customers. But, as you’ll see in the statistics below, Baby Boomers and seniors are using social sites at higher rates than ever before, making the value of investing in these platforms clear!

Users ages 65+ have roughly tripled their presence on social networking sites over the past four years.

Further data from the Pew Research Center’s Internet & American Life Project tracking surveys demonstrates that not only are adults using social networking sites at unexpectedly high rates, their adoption of these new media channels has roughly tripled over the past four years amongst the internet’s oldest users. No other demographic group has come close to matching these overall engagement rates: 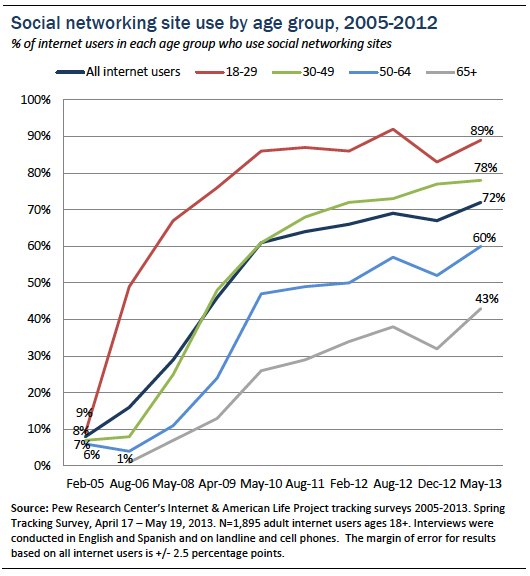 Simply put, older adults are interested in social media and they’re adopting it at higher numbers than ever before. If you think that your older customers aren’t interested in hearing from you on these channels, think again!

57% of online Baby Boomers are using Facebook, along with 35% of online seniors

So now, knowing that older adults are engaging with social networking sites at unprecedented rates, your natural next question should be to ask, where should I focus my online efforts?

Of the 88% of Baby Boomers who are active online, 57% prefer to use Facebook for their social interactions, according to the Pew Research Center’s “The Demographics of Social Media Users – 2012” report. In addition, of the 57% of online seniors who use social networking sites, 35% prefer to use the web’s top social network — which currently boasts over 1 billion users — for these purposes. And given that the above referenced report cites the desire to reconnect with past friends and acquaintances as the top reason older adults use Facebook, sharing your funeral home’s death announcements on this social site is a natural fit for its users’ preferred interactions.

Finally, if you’ve already established a Facebook presence for your funeral home and want to further expand your social media marketing efforts, your next stop should be Twitter. Although adoption rates are still relatively low among older adults (only 10% of Baby Boomers and 2% of seniors are using Twitter), the 55-64 age bracket does hold the distinction of being the social service’s fastest growing demographic.

Getting started on Twitter isn’t as difficult as it sounds, and we’ve laid out some of the biggest mistakes to avoid on the platform here. But if you need any additional information or support when it comes to taking your funeral home online in order to reach these older users, don’t hesitate to give us a call at 866-372-9372 or fill out the form below!